For those of you who still hold tickets for the Trio Ecossaise concert on 29th March 2020, and which we had to cancel, I can confirm these tickets will be accepted for their concert on April 25th, 2021. 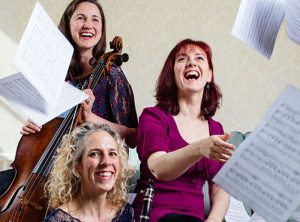 Trio Ecossaise have performed together for over fifteen years. In addition to concert performances across Scotland, they have delivered interactive workshops in primary and secondary schools; given masterclasses in schools and at Glasgow University; and worked in different combinations in healthcare settings, equally at home improvising with dementia patients or playing lullabies to babies in intensive care.

In the past season the Trio have performed the cornerstone repertoire of Brahms and Beethoven (Skye Chamber Music and Music in Lanark), lesser known works by John Ireland (Sunday at Seven, Helensburgh) and Glinka (Crail Festival) alongside 20th century pieces including Muczynski Trio and Nino Rota Trio (Bute Music Society).

Trio Ecossaise work with promoters to tailor a programme to satisfy and entertain, and enjoy creating a rapport with their audience.

All three musicians hail from Scotland, and were professionally trained at respected conservatories – the Royal Northern College of Music and Indiana University (Jennifer), Oxford University and the Guildhall School of Music (Harriet), the Royal Scottish Academy and the Guildhall School of Music (Claire).  In addition to their chamber music commitments, they each pursue busy and diverse freelance careers.