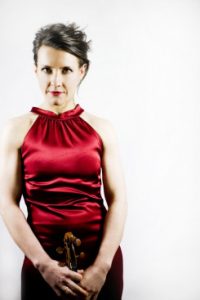 Andrea and Djordje Gajic make up the exciting violin/accordion duo ADlibitum. Both extremely proficient artists in their own solo careers, together they perform an exciting repertoire and have given concerts in Scotland, England, Serbia, and regularly at the Victoria International Arts Festival in Gozo, Malta.

Andrea Gajic received her early musical training at St Mary’s Music School, Edinburgh. When she was twelve, she performed the Bruch Scottish Fantasy at St James’ Palace, London for Yehudi Menuhin’s 60th Birthday celebration. Andrea studied for 5 years at the Gnessin Russian Academy of Music, Moscow where she gained her Masters Degree and Diploma in Solo Performance. She subsequently went on to study at The Royal College of Music for Post-Graduate.

She has performed as soloist in Britain, The United States, Russia, Lithuania, Finland, Germany, France and annually gives recitals and Masterclasses in Serbia.

She teaches violin at the RCS, Douglas Academy of Music, and St Mary’s Music School and in October 2018 she was honoured to receive a Professorship at the Royal Conservatoire of Scotland.

She plays on a violin made by Nicolaus Gagliano in 1766.

Djordje Gajic began his musical studies in Serbia at the age of six, finally graduating from the Russian Academy of Music in 1993 gaining a Master of Music degree and Honorary Title ‘Solo Performer’. 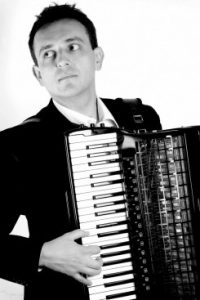 Djordje has won many International Competitions, amongst them Tropheo Mondiale CMA in 1988 and the Grand Prix, France in 1987. He has performed with the RSNO and the Russian State Symphony Orchestra under the baton of Yvgeny Svetlanov, as well as giving many solo recitals in Russia, Serbia, Andorra, Holland, France, Germany, Poland, Latvia, Italy, Croatia, Slovenia, Norway, and Britain. Since living in Britain he has given solo recitals in all the major cities. He has also performed at international music festivals in Darington, Norwich, Salisbury, and Birmingham.

Djordje is an accordion professor at the RCS and St Mary’s Music School, Edinburgh.